The Best Ten Worsts One Year In 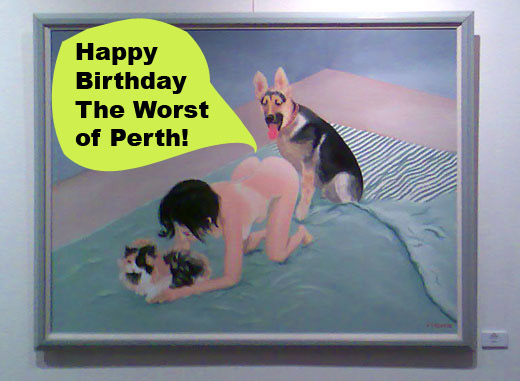 The Lazy Aussie’s Top ten worsts from the blog’s first year. You may have others.

Triumph of The Worst. The Worst of Perth has public art removed from City.

The giant arsed aboriginal sculpture got laughs from all over the world. I don’t think the artist was ever identified.

Brian Burke works the room, the room being 1980’s McDonalds

Advocating the wearing of shirts to facilitate success. Subtle worst. Favourite of many.

The Mud Men of Mount Lawley.

Comedian, artist, photographer and critic. From 2007 to 2017 ran the culture and satire site The Worst of Perth
View all posts by AHC McDonald →
This entry was posted in worst of perth. Bookmark the permalink.

26 Responses to The Best Ten Worsts One Year In