There’s someone in town who really doesn’t like 6PR Radio. I know that narrows it down to everyone less than 70 years of age, but this particular person often likes to vent their spray on this old corner shop on East Parade in East Perth. I sometimes suspect a The Worst of Perth reader. My suspicions fall variously on Cohen, Calabrese, Skink, Bedford Crackpot and Rolly, but perhaps it will turn out to be a Murder on The Orient Express affair with all of them holding the spray can. Out of Perthers, you could listen to 6PR online but don’t, unless you like to hear pensioners whining about immigration and eating dog food, and how they laid their down their wives for young people during the war…

I’ve made the mistake in the past of going back the next day, or even a few hours after spotting a new daub, only to find the pith painted over quick time. I’ve missed “Sattler 6PRacist” and something about Brad Hardie being a moronic loser, or bankrupt, or something. You can see where they have been painted out. This time however I swung across two lanes of commuters to get the Barra version. The thing is, Barra is one of the least offensive in the crew of this good ship Venus, just an amiable bumbler who played a bit of sport. Oh well, one man’s amiable bumbler is another man’s fat wog cunt I suppose. 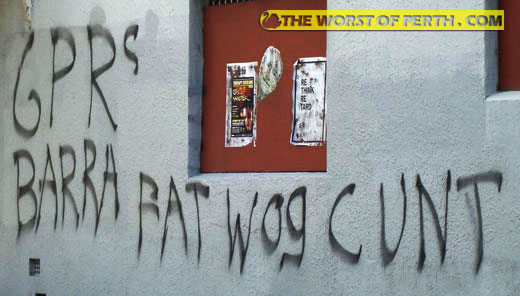