Firstly, Fairlanes is gone, which wasn’t so much of a worst apart from it being owned by the Bond family I believe. Bye bye Fairlanes.

On the good side, apparently the Langtrees artwork was removed immediately after its appearance on this site. Bye bye Ms K. 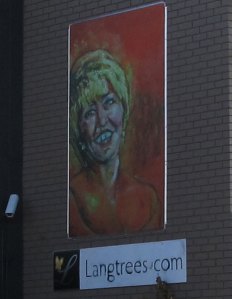 The mystery flaming Wardrobe on Beaufort Street is gone. Bye bye flaming closet. Missing you already. Why didn’t I open it when I had the chance?

There may be a flaming homosexual inside.

And horor of horrors, apparently the destruction of The Red Castle Motel, an icon of happy nostalgia and bad taste is to be announced in the West today. What a tragedy. What the hell is the Heritage Council up to? Might as well be the fucking Style Council.

say it aint so red castle

The Hans Merks palace of teh auto on Beaufort Street was finally demolished this week. Bye Bye and thank You Hans Merks.

What a week. What a week of horror. Apart from the painting going of course. I need a brace of Howling Wolves. Phew!