More from Hotblackdesiato. We’ve had a house dauber before Hottie. He’s probably right about the death of justice. It has the feeling of a letter to the editor to the West. The house is great. It reminds me a little of KGB Headquarters. I just wish you had a shot of the car! I remember the car parked in Freo. Someone may have a pic. He’ll probably supply one when he hears about this post.

This fellow didn’t get an outcome he wanted in the courts so then drove around with a coffin on the roof of his very tatty old falcon station wagon with writing down the side proclaiming the death of justice in WA. He also did it to his house, which is now daubed in all manner of diatribe. The house would have been a good Worst even if he hadn’t really put a seal on it! Its on the corner of Moran Crt and Beard St, Stevie Wonder couldn’t miss it… 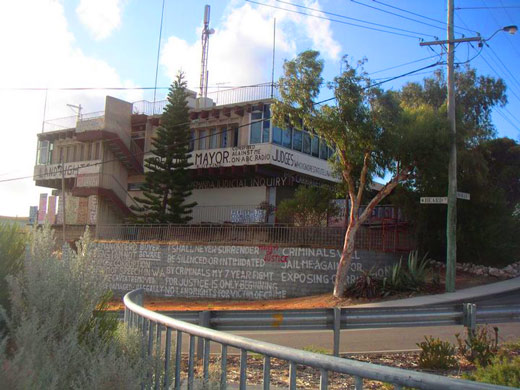 Comedian, artist, photographer and critic. From 2007 to 2017 ran the culture and satire site The Worst of Perth
View all posts by AHC McDonald →
This entry was posted in worst house and tagged justice, worst house. Bookmark the permalink.

21 Responses to Justice Once