How many years has this Guildford Hotel crap been going on? I would have been happy with demolition by now. What do we think of the new proposal? I admit that at first I was of the opinion that the apartments ( that will fund the hotel renos) should be lower than the height of the hotel. But as a famous Guildford resident said, “It’s just fucken Guildford, who cares?” And you have to credit that point of view. The  so called heritage streetscape is not really that interesting apart from a very few shopfronts. James Street used to be named Mangle Street after Governor Pedo’s Stirling’s wife’s family. Wouldn’t we be assenting to Pedo Stirling’s proclivities? I’m ambivalent about it. Yes, the apartments are probably shithouse. But then again, not a soul ever went into the Guildford Hotel pre burning. Everyone hated it.  It was a craphole. I can’t help feeling that the influx of wankers would improve Guildford. There might even be a customer for the hotel. What do youse think? Asks Carbuncle. 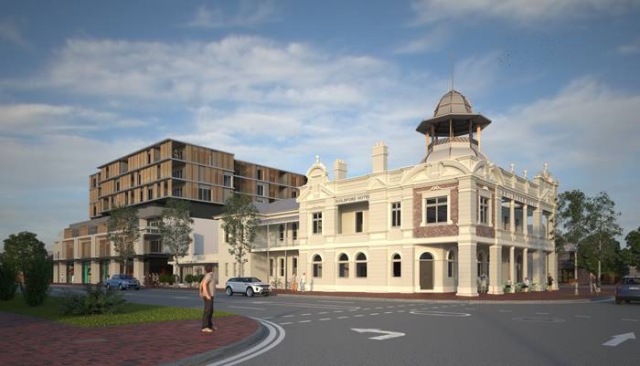 Comedian, artist, photographer and critic. From 2007 to 2017 ran the culture and satire site The Worst of Perth
View all posts by AHC McDonald →
This entry was posted in worst pub/hotel/design and tagged #carbuncle, guildford, hotel, pedos, stirling. Bookmark the permalink.