I was going to put this up tomorrow, but since everyone else is reporting it, It better go up now. ie, the moronic tardation of Gina Rhinehart in verse form. In one sense it forms a kind of bad poetry precinct, standing as it does at the other end of the small street which is graced by the walrus. So it could be some kind of bad poetry Champs Elysee. Gina actually makes the walrus poetry sound good. (Following the pics is an extensive critique by Natalia Fan#1)
Contrast Gina’s
“Is our future threatened with massive debts run up by political hacks
Who dig themselves out by unleashing rampant tax…”
with
“Into Time, Into the Dream
The Moon and the Sun
Only from within can this love shine”
from the walrus.
Nice to see that a Chinese dude taking a pinch some of the iron ore that will end up in China anyway. 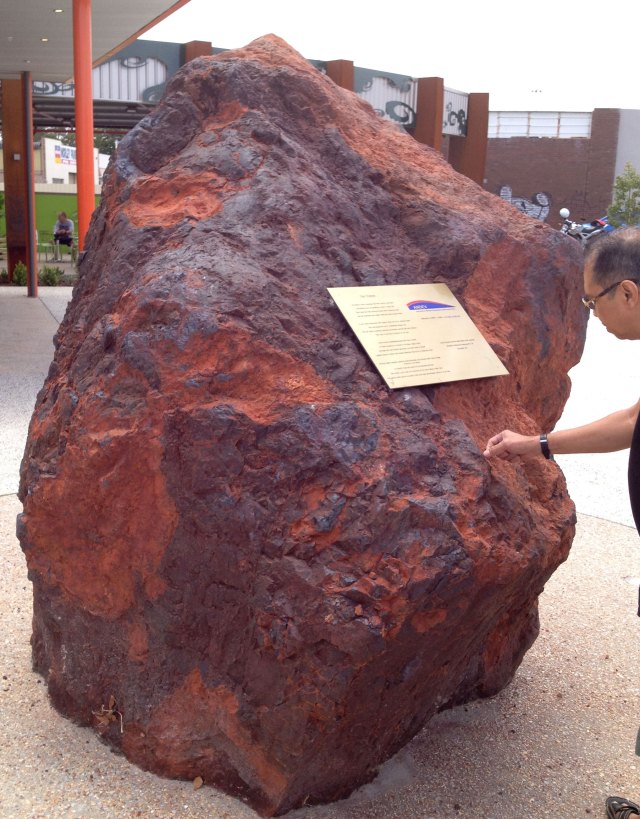 A critique by Natalia Fan#1
It is said that money talks and bullshit walks, and it is difficult to conceive any greater illustration of this maxim than Gina Rinehart’s new poem, succeeding as it does to do both. Far more so than with Banjo Patterson, or even the great Nanushka for that matter, in Rinehart Australian poetry now has a force to be reckoned with. As though dragged from a super pit and hastily sand-blasted, this rough-hewn gem of a poem is perfectly apposite to the urgent sentiments it expresses. Indeed, no Australian poem I know has seemed so urgent in terms of either message or delivery. Through its absence of punctuation the reader cannot help but hear the overweight magnate’s shallow breathlessness.

The decision to write in unevenly metered heroic couplets is suggestive less of an amateur’s hand than of the heroism and noblesse which the rhyme scheme usually connotes, while the poet’s orderly use of alexandrine in the poem’s first two lines ironically signals how our current precarious position is indeed the order of the present day:

The globe is sadly groaning with debt, poverty and strife
And billions now are pleading to enjoy are [sic] better life

Hence it is all the more poignant that the sprung rhythm of the third line should suggest that order’s breakdown, all the while intimating possible redemption:

Their hope lies with resources buried deep within the earth

Sprung rhythm as we know has its own order; a kind of order-in-dis­order which in this case mirrors the poet’s desire for deregulation rather than the straightjacket regimen of taxation and law. This regimen is given voice in the poem’s fourth and fifth lines, which with considerable continued irony emulates the petty managerial speak of both business and politics, their seven feet per line scheme suggesting the kind of dissembling talkiness characteristic of the “political hacks” against whom the poet fulminates:

This glib loquaciousness is brought up short by the relative pithiness of the sixth line’s pentameter:

Who dig themselves out by unleashing rampant tax

The effect is repeated without outstaying its welcome with the seventh and eighth lines, in which a rambling eight foot line is once again replied to in pentameter:

The end result is sending Australian investment, growth and jobs offshore
This type of direction is harmful to our core

The only seemingly aleatory structure of the poem’s middle section almost directly represents the agonistic contest of free-thinking entrepreneur and incompetent politician. A dialogue of sorts is subtly set in motion, the slack facility of the politician’s tongue brought up short each time by the miner-poet’s rejoinder, as once again occurs in lines thirteen and fourteen:

Develop North Australia, embrace multiculturalism and welcome short term foreign workers to our shores
To benefit from the export of our minerals and ores

The repetition here of the awr rhyme first heard in lines seven and eight sets up fruitful associations between “shore”, “ore”, and “core”. As Australians our core identity and values are at one with the kind of core “buried deep within the earth” (3), awaiting the miner’s drill just as our both mineral and multicultural potential waits to be unleashed, instead of the “rampant tax” (6) that would otherwise stifle it. The contrast between the “miners, workers and related industries” (12) and the “envious unthinking people” (9) who would hold us back could not be more stark at this point, with the thudding alliteration of the twelfth line’s second half (“related industries who strive to build the world”) reinforcing the hard-earned prerogative of the “worker”, and by extension the bosses. Moreover, the truly illuminating contrast between the “globe” of the poem’s opening line and the “world” as it now appears should not go unnoticed, forming as it does another crucial element of the poem’s dialectic, whereby the “globe”, as something circumscribed and thus regulable, vies with an alternate conception of “world”; of horizon and thus of possibility.

The final line, in all its twelve feet, is really two, thus reprising the poem’s initial couplet, together with its intimation of order. From what was once pernicious a new and perhaps for the first time inclusive order has been wrung: that of the “special economic zones and wiser government” which would not put aside the “world’s poor” (15), who now stand to gain through their enfranchisement as “foreign workers”, however “short term” (13). The breadth and largesse of Rinehart’s poetic vision is at this point simply breathtaking, and forms and apt conclusion to her heartfelt plea for economic and moreover social justice.

That modern poets are most often perceived as hermetic obscurants by the general public means that the eventual public context of Rinehart’s poem – etched on a plaque decorating the poet-donated rock which will eventually take its place outside a popular new market – should not go unremarked. As our new people’s poet reminds us, a truly free market would surely be the rock on which a free and prosperous Australia could be founded, and on which the unreasonable and unnecessary restraints imposed by the self-appointed social engineers and moral guardians who rule our land would just as surely founder.

Comedian, artist, photographer and critic. From 2007 to 2017 ran the culture and satire site The Worst of Perth
View all posts by AHC McDonald →
This entry was posted in worst of perth and tagged coventry markets, gina rhinehart, worst poetry. Bookmark the permalink.