There have been questions about whether Perth , modern Perth has its own architectural style. Perth architectural theory is architects blaming the clients for forcing them to build crap buildings. (And if you want to see what’s wrong with Perth’s architectural future, have a look at the excuse jockeys and complainers here. I’m thinking some of these guys will have the bad luck to have crap clients for their entire careers.) But we do have a big scene style developing. Shedism. Stripped of its Derridarian facade and Lacanian gyprock , it means building shitty giant sheds at great expense in the wrong place. It started with The Convention Centre. The reason for its crapness was, can you guess? Correct. Dud clients. What were they to do but build a dud building? Now the next generation is Perth Arena. What anyone was thinking with this ultra expensive eyesore engineered to look cheap is beyond comprehension, although I’m wagering a terrible client forced the architects to draw this turd up. Multiplying budgets, cock ups by several governments, almost everyone can be blamed. But when Sydney had those problems, it got the Opera House. Not an expensive shed made to look cheap and crappy. And these are the best sides. As long as they don’t decide to clad bits of it in half arsed Fed Square naff shapes. That could never happen. Nobody could get a client that bad could they? 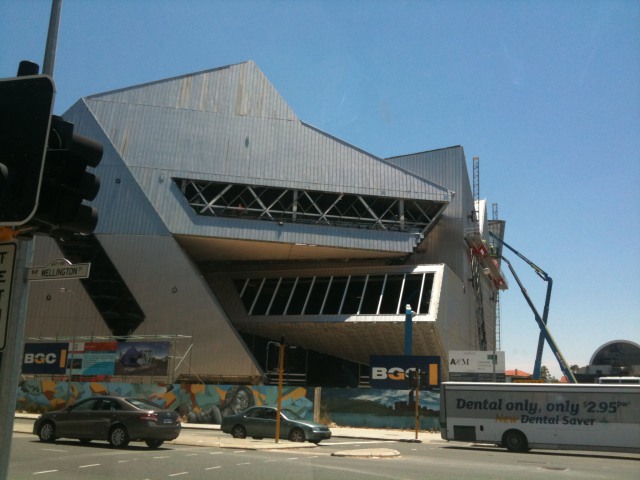 Comedian, artist, photographer and critic. From 2007 to 2017 ran the culture and satire site The Worst of Perth
View all posts by AHC McDonald →
This entry was posted in worst architecture and tagged fed square, northbridge, perth arena, worst architecture. Bookmark the permalink.