To take a break from the excellent Caribou Bob  material, Outrage Cohen and Krazy Kym took a trip to the home of the Elite Bumpkin, the Southwest. Bumpkins using French is outre in extremis. Orange Soil is assumedly not related to night soil. DFOC says…

The nice restaurants down south are so educational. This is Vasse Felix. Of course I pounced on pumkin, and thought they were in a jam with gelee – but I see the French for jelly is gelee. Use a French spelling that some might not understand, but might be pronounced the same way as the English word – pretentious, moi? We decided not to ask what orange soil, gribiche and acar kuning were and pressed on to Lamont’s. 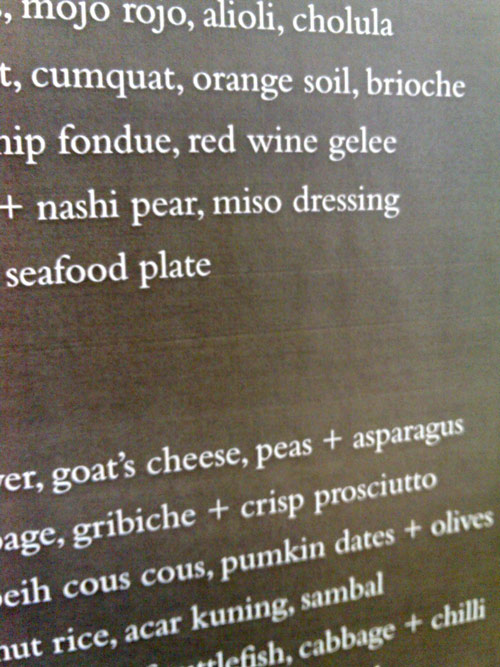 Krazy Kim also attempted to grab the Wolf by the balls in Margaret River, but testiculus lupus seem to have evaded her iron grip.  Howling Wolves is still the favourite beverage of The Worst of Perth, but we haven’t been rewarded with carton one yet. Outrage! The best part was censoring KK’s face.