I missed Gabe on the senate paper, way down past the Pedo & Roomba Party, but his slogan is “Breaking the Australian Drought one Bottle at a Time”. Rendered in an unreadable kernalicious running writing font. And there’s a curious vibe to the scene. Well, better than Emo Simpkins no?  ﻿ 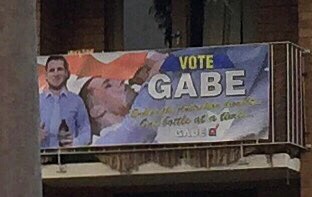 Comedian, artist, photographer and critic. From 2007 to 2017 ran the culture and satire site The Worst of Perth
View all posts by AHC McDonald →
This entry was posted in worst sign and tagged emo simpkins, Gabe, highgate, worst politician. Bookmark the permalink.