The Colour of Money

Tom Thrett recently left some comments on the worst churches, saying he’d seen much worse, particularly St Cecilia’s in Floreat, Yokine Baptist, and Yokine Anglican. I visited them all Tom. The Yokine ones are pretty bad (we’ll see them later), but I didn’t see St Cecilia’s as a travesty of design. I can see why some might have it in their worst list, but I didn’t mind it. This is the one you meant right Tom?

This thing out the front was a little odd though, but no matter where they are in the world, all Perth expats would instantly recognise the colour on the base. It should be the official colour of the city – bore water brown. Do other cities have this discolouration, or is it unique to us? 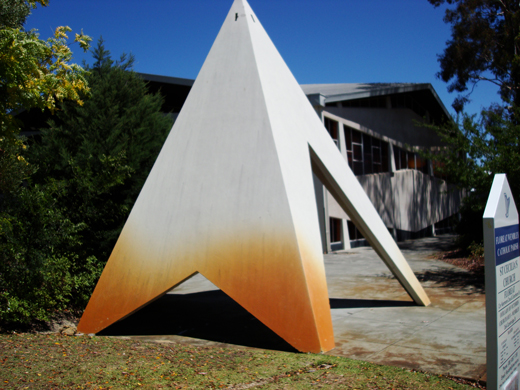 The church itself though was quite interesting in a 60’s sort of way.

13 Responses to The Colour of Money