The Ashfield of History

Mazarina who braved the interior of KGB Headquarters just to get me a shot of their carpet, sent me out to Ashfield to snap the house below. I had already been tipped off by Bedford Cath about this poor fellow in the next street as well. Despite having grown up in the era where these were popular, I cannot recall the reason behind people having them. Surely these sad, sad, concrete aborigines go beyond even extreme irony? This at Vinsans salvage in Katanning Street Ashfield. 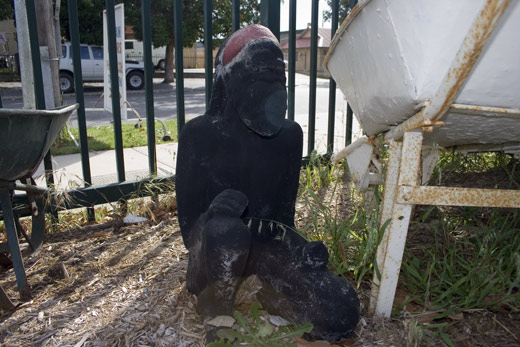 Mazarina alerted me to this house nearby, but unfortunately the owners were in the garden, so was unable to get the full majesty. By the way, Mazarina, (aka Marina) is taking part in an amazing Fred Hollowes fundraising challenge. Have a look, and if you want to find out how to help her, email her at Marina.Sucur@dpi.wa.gov.au

I wanted to get the Ashfield Tavern too for worst pub, since someone had been shot dead there, but I couldn’t find it.

Comedian, artist, photographer and critic. From 2007 to 2017 ran the culture and satire site The Worst of Perth
View all posts by AHC McDonald →
This entry was posted in worst garden, worst sculpture and tagged aboriginie, ashfield, concrete, concrete aborigine, worst garden. Bookmark the permalink.

29 Responses to The Ashfield of History