Your Nutrition and Hydration on the Gallery Scene, brought to you by The Worst of Perth.

No catering surprises from an art collective group at Janet Holmes à Court’s West Perth industrial-unchic gallery @ No. 10. But it would be ungracious in any case to expect rare beef noisettes from a self funded group exhibition. But one does wonder how many mini quiches the cost of that string quartet could have funded. 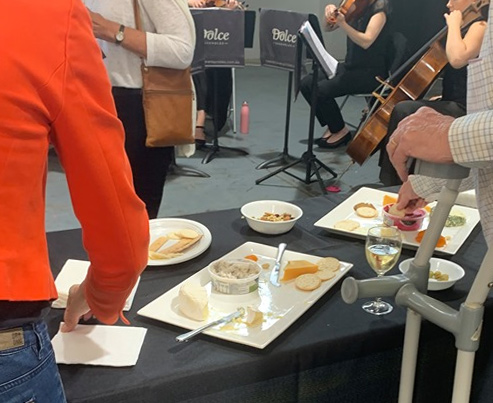 The wine token trend is however a little alarming for veteran art soaks. While you can appreciate a group of amateur artists trying to keep costs down, it would be disastrous if this vile token system was to extend to too many other venues. Imagine, IF YOU CAN, trying to look at portraits of people you don’t care about at The Lester Prize on just two glasses! It’s unthinkable! No. This cannot stand.

As a side note, apparently this precinct in West Perth where galleries such as Stala and HaC’s @no.10 are situated is supposedly to be called “The Pickle District”. Sounds a little try hard, a la George Costanza trying to get nicknamed T-Bone, but there you are. Sadly the dead hands and blunted imaginations of Perth’s mural artists are already descending on the place, and anodyne and boring pieces are going up to spoil the pleasant industrial feeling of this pocket. Can yet another tedious Stormie Mills or even worse a (gulp) Melski be far away?  Why don’t we just call the area Little Maylands and be done with it?As soon as you see a wall covered by that guy who paints leaves on everything, you can be assured that the “precinct” is finished as any kind of interesting area. It’s so embarrassing that Perth still thinks that “authorised” street art is cool.

And I’m not calling it the fucking Pickle District either.

3 Responses to Tokenism at Number Ten