Who has been fiddling with MLC Phil Edman’s Wikipedia entry? A reader says it has been done to “sanitise an early misdemeanour, excise an unflattering early electoral defeat, and then generally fill the page with chest-beating ‘look at meism’.” Well: there’s been an early misdemeanour, and a later one. Our reader says the sanitising is a direct lift from Mr Edman’s Liberal Party profile. “Hardly the most objective view, though Wikipedia does warn the unwary that the style of the page isn’t quite in mould,” our reader says. “It comes on the back of the Hon Edman getting philthy with nudists, who he thinks should be banned from his electorate (he’s got a nuddy spot down there) on the basis they need protection from pervs. His claim was sparked by one sexual assault that occurred there, and we kind of wondered why he hadn’t put out the call to ban all churches.” Baffling! As has been noted before, Mr Edman does things. I am no digital wizard, but the address of the person doing the fiddling seems to indicate they might be associated with High Wycombe Primary School. The fiddler has eclectic interests: they have also edited articles on the Hon Sean L’Estrange, the Hon Paul Miles, the Hon Graham Jacobs, and Royalties for Regions, Riff Raff, the First Balkan War, Everlast, and Amy Meredith! 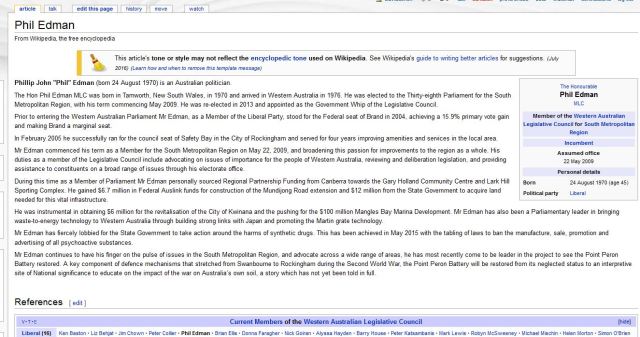 This entry was posted in Uncategorisable Worsts and tagged drink driving, house on the hill, Member of Parliament, rockingham. Bookmark the permalink.