The Bass tard asks if it is time for this to go. Commuters have been passing it by for what at least a decade? Are they stil moved by the fight between good and evil? Is this now a worst? Was it ever anything else. Bass tard sez…
…a befuddling mural, at the Moore St railway crossing in Perth between McIver & Perth stations, depicting an angel and a demon engaged in battle upon fanged steeds. It’s been there since I was a little tacker catching the train to Leederville TAFE from Bassendean but  I’ve never been able to figure out the symbolism. It also seems unfinished (the ‘writing’ at the top not completed filled in) but it was always there so always meant Perth to me. But perhaps that’s what Perth is: confusing and seemingly incomplete.

I’m thinking that it’s less worst than bare brick but maybe it’s time to go. But being Perth, you’d know that something worse would go up instead. By the way, is that Lord Gaga Luke Steele  on the white? 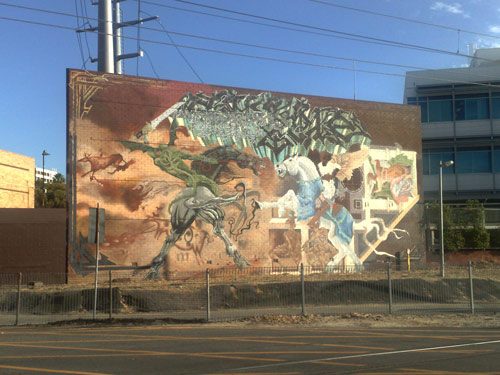